The Bihar School Education Board (BSEB) is all set to declare the matriculate or class 10 board results on Tuesday, June 20.

Once the Bihar Class 10 results will be declared, all the candidates can check the same at biharboard.ac.in

“We are working out the modalities. Things are in an advanced stage,” BSEB chairman Anand Kishor said in recent HT report.

How to check Bihar Class 10 board results:

After Ruby Rai, this year also, Bihar board came under the topper scam fiasco. 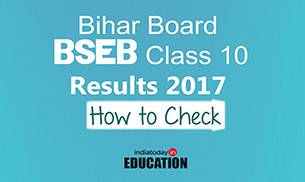 The 24-year-old Ganesh Kumar scored 65 out of 70 in music practicals.

While speaking to Rohit Kumar Singh, India Today, Ganesh said, “I don’t know much about music. I just attended a couple of music classes in the last two years that I spent in college before appearing for the intermediate exam.” He further added, “I never thought I would become a topper in Bihar Board. I was a satisfactory student but never thought that I would top the exams.”

Leaving no stone unturned, the board has also planned to conduct verification of top 10 performers to prevent any chance of forgery.

The Bihar board conducted the Class 10 examination in the month of May.

It is said that nearly 17 lakh students from Bihar appeared for matriculate (class 10) board examination this year.

Important note: Unlike Class 12, in matriculation (class 10), there is just one topper.

The Bihar School Examination Board (BSEB) is established for holding and conducting an examination at the end of the Secondary School stage, for prescribing course of studies for such examination and for carrying out such other objects and duties as may be considered necessary for the purpose as stated in the act, rules and regulations of the board.