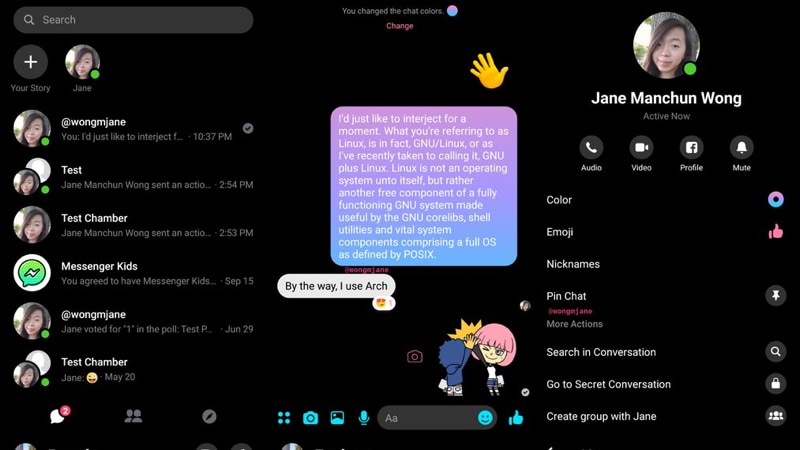 Facebook had announced a massive redesign of its popular Messenger app back in May last year, during its annual developer conference F8. Since then, the company has been rolling out changes gradually across the world. Facebook Messenger is a popular app considering a large number of people on the social network use it for communicating with their friends and family. Facebook had promised a dark mode in its Messenger app last year and it seems like the company is now testing it in several countries.

Well known app teardown expert Jane Manchun Wong tweeted that Facebook has started testing dark mode within the Messenger app, but only in certain countries. Wong also added that the new dark mode isn’t available everywhere yet and Facebook issues a ‘Work in Progress’ warning within the app for the same reason.

Earlier, Wong was able to activate the feature and she later tweeted screenshots of Messenger’s upcoming dark mode. As expected, it turns the white background colours into black and the text into white. However, as Facebook states in its warning, there are a few subtle details that are still white.

Back in October last year, Facebook had launched a revamped version of its Messenger app. The whole idea behind the redesign was to simplify the app and make it easier for its users to chat, make video calls, and more.

Facebook hasn’t revealed where it is currently testing the new dark mode in Messenger. The feature is available under the ‘Me’ section in Messenger if your country is currently supported for the test. The warning message issued while the feature is enabled also clarifies that Facebook is still putting ‘finishing touches’ to the dark mode.

With Facebook reportedly testing the new dark mode again, it doesn’t seem like the final version is too far away now. For those who spend hours chatting on the Messenger app might appreciate the dark mode as it tends to be slightly easier on the eyes. Facebook Messenger currently has over 1.3 billion monthly users across the globe.