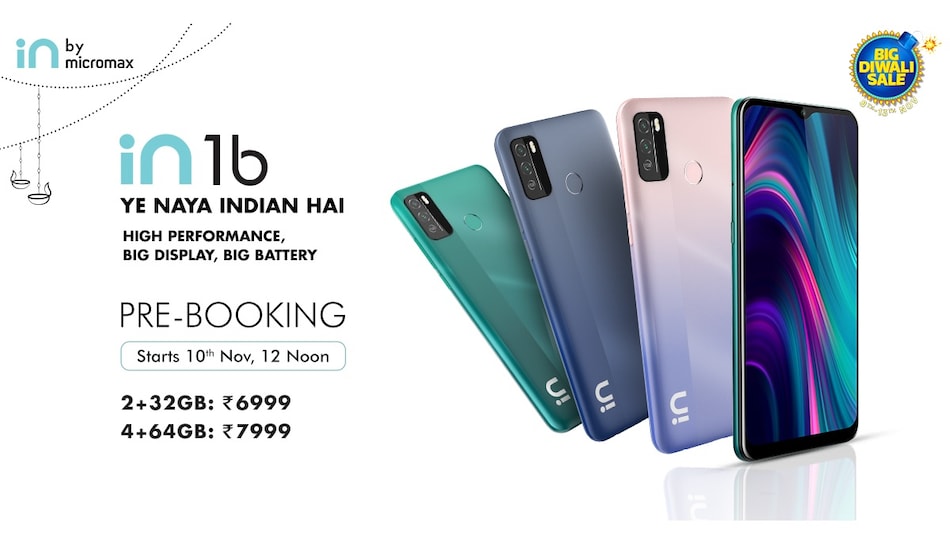 Micromax In 1b will be up for pre-booking starting November 10 at 12pm (noon), the company revealed through a tweet. The phone, along with the Micromax In Note 1, were launched in India on November 3 and will be going on sale later in the month starting at Rs. 7,999. The company is opening pre-bookings this week for the Micromax In 1b on Flipkart during the Big Diwali Sale. The phone comes in two RAM and storage configurations and is offered in three colour options.

Micromax In 1b price in India, availability

As of now, Micromax has not shared details about the Micromax In Note 1 that will go on sale from November 24.

Micromax In 1b specifications

The dual-SIM (Nano) Micromax In 1b runs on Android 10. It features a 6.52-inch HD+ display with a waterdrop-style notch. The phone is powered by an octa-core MediaTek Helio G35 SoC and comes with 2GB and 4GB RAM options.

In terms of optics, there is a dual rear camera setup that houses a 13-megapixel primary camera sensor with an f/1.8 lens and a 2-megapixel depth sensor. The Micromax phone also comes with an 8-megapixel selfie camera sensor at the front.

The Micromax In 1b has 32GB and 64GB of onboard storage options and both are expandable via microSD card. Connectivity options include 4G VoLTE, Wi-Fi, Bluetooth, GPS/ A-GPS, USB Type-C, and a 3.5mm headphone jack. The phone also features a fingerprint sensor at the back. The Micromax In 1b comes with a 5,000mAh battery that supports 10W fast charging and reverse charging.