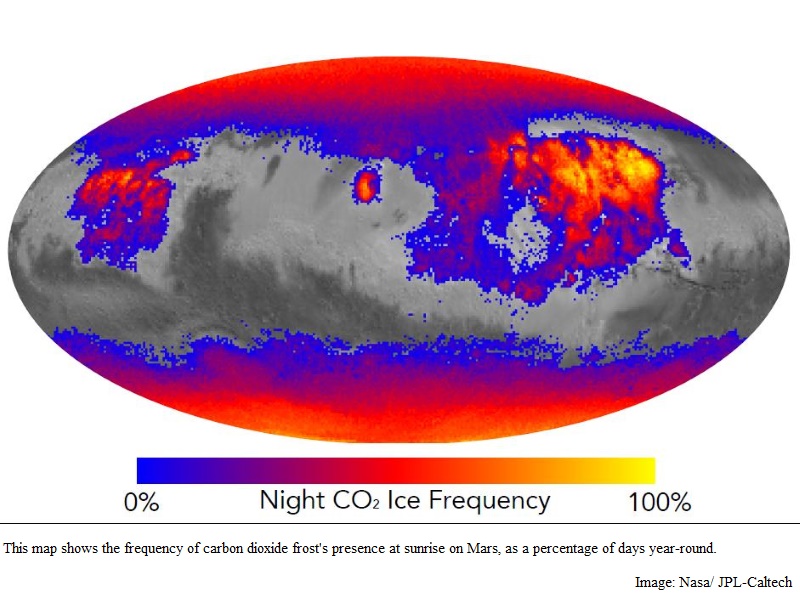 Nasa’s Mars Reconnaissance Orbiter has found that carbon dioxide ice more often covers the ground at night in some mid-latitude regions than in polar regions of the Red Planet, where it is generally absent for much of summer and fall.

Some dusty parts of Mars, at night year round, become as cold as the planet’s poles do in winter and also some regions near the equator in summer, according to new Nasa findings.

The surface in these regions becomes so frigid overnight that an extremely thin layer of carbon dioxide frost appears to form. The frost then vaporises in the morning.

Carbon dioxide is the main ingredient of Mars’ atmosphere. The planet also has large reserves of frozen carbon dioxide buried in the polar ice caps.

Seasonal buildup and thawing of carbon dioxide frost at high latitudes on Mars have been studied for years and are linked to a strange phenomena, such as geyser-like eruptions and groove-cutting ice sleds.

“The temperature gets so low, it starts freezing the atmosphere onto the surface,” said Sylvain Piqueux of Nasa’s Jet Propulsion Laboratory, Pasadena, California, who led the study which published recently in the ‘Journal of Geophysical Research: Planets.’

“Once you reach that temperature, you don’t get colder, you just accumulate more frost. So even on the polar caps, the surface temperature isn’t any colder than what these lower-latitude regions get to overnight,” Piqueux added.

Three middle- and low-latitude areas in the Tharsis, Arabia and Elysium regions of the planet have temperature at night cold enough for carbon dioxide frost year-round or nearly year-round. Each of the three is bigger than the US state of Texas.

“These same regions that are coldest at night are the warmest during the day. It has to do with the nature of the material – it’s so fluffy,” Piqueux said.

“Think of when you are at the beach on a summer afternoon, where you step on the fine grain sand almost burning your foot. But just below the surface it is not so hot, and if you touch a boulder, it doesn’t feel as hot as the sand at beach. Then at hight the phenomena reverses as the surface of the sand cools off quickly, while the boulder stays warm,” he added.

The science instruments on Nasa’s Mars Reconnaissance Orbiter have been examining the planet since 2006.